Spectacular technique from a Portguese sniper, an Ecuadorian bullet and a Russian king who comes across like a Mob Boss ruled the off-world night, the last in the jungle of Anger Wat

As we roll into our third episode of Karate Combat, the excitement is in full swing, our fighters are in top form, and the fun is just beginning.  We open with a teaser from Bas already letting us know that something new is waiting for us at the end of the show, hooking us from the start. As if to sweeten the pot, Marshawn Lynch, ever the lovable Grasshopper to Bas Rutten’s Miyagi, shows us the lessons he’s been picking up, with Bas ever hopeful that his most unlikely student is only a short time away from his own Superstar Karate Combat debut…

(Hey if you missed it, you can still watch it here.)

Karate Combat literally exploded with their first fight of the night, Vitalie Certan from Portugal vs. Gabriele Cera from Italy. A fast moving, anything goes match energized not only the crowd, but thoroughly impressed the commentators. Both fighters seem to not only have used every inch of the pit, but took advantage of the air real estate as well.  They gave it their all, jumping, spinning and sparring in a technically beautiful match. Certan’s training with The Pit Bull Brothers in Brazil seemed to pay off, and he was definitely  connecting in the third round. Cera, for his part, had an incredible display of back kicks. Certan’s takedowns were quick and aggressive, as Marshawn nicknamed him “Little Bro” a ball of muscle who moved like a Ninja.

The question became, will the Judges favor Certan’s takedowns as much as Cera’s back kick?

Winner, by unanimous decision, was Vitalie Certan. As the commentators’ said, “Cera had great defense, kept his hands up the whole time but that guy, Certan, is just a sniper.”

Speaking of snipers, the age-old question remains:  Would you bring a kife to a gunfight? That certainly seems to be the case with our 2nd fight of the night, as Callum Robb, a Marine Biologist and a Highlander from Scotland, vs. Franklin Mina, “The Bullet”, from Ecuador.

Off the bat, this seemed to be a fight of interest.  The tension began to build, and there was a lot of hesitation from both sides as to who would react first? Robb’s complexion was as white as his Gi, and we were concerned that Mina kept his head up and showed a lot of hesitation, getting into position and retreating, into position and retreating.

Finally, Robb connected with Mina with a head shot, but as the second round began, we felt there was a bit of point fighting influence here, which doesn’t fare too well within the Fighting Pit. Bas said, “Mina needs to step it up. First round is really good for him but now his opponent is starting to do much better.” Marshawn actually wondered out loud if Robb was afraid – and that is right at the point where everyone felt that the fight really began. Jabs thrown, contact made, and the trigger was pulled, as “The Bullet” was disengaged.

Robb’s stamina seemed to be an issue going in the third--and Mina’s physical conditioning seemed to,just for a moment, invoke Muhammed Ali  through his jabs.  As Bas kept pointing out, Mina kept his hands up – and Bas should know, as Bas held a 22-fight winning streak.

Winner by unanimous decision, Franklin Mina from Ecuador, answering our question about the knife and the gun. 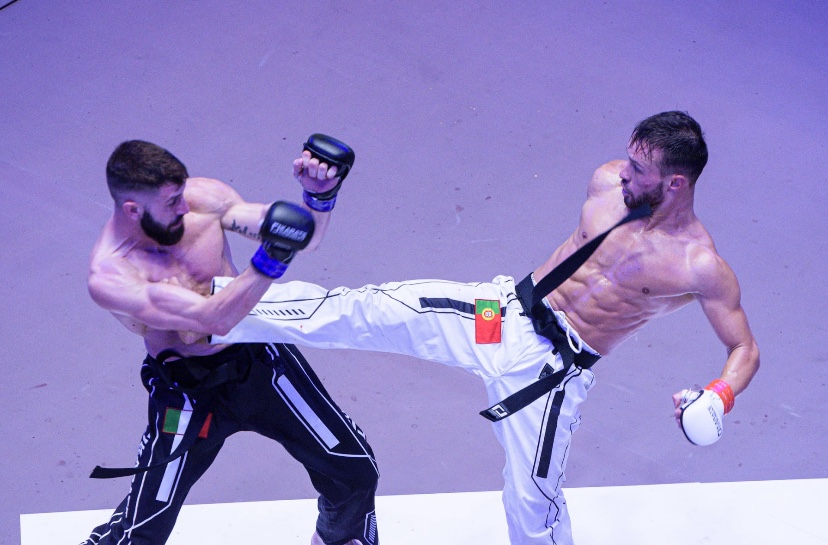 As Bas stated, point karate is so different from full contact karate, and these fighters need to make sure they do not bring bad habits into the Karate Combat pit.

The Main Event was Myrza-Bek Tebuev, “The King”, or as some describe him, a Russian James Bond/Godfather, vs. Daniel Viveros, the “Black Diamond”, also from Ecuador.

Round One begins, and Bas worries that this fight will carry the same hesitation as the match before. Then Tebuev delivered a roundhouse kick. A lot of throwing, but it felt like no one was following through, both opponents needing to feel each other out, according to Bas. As the anticipation continued to build, Tebeuv finally began to land a hit or two.

Finally, later,  opponents were countering the counter, until Viveros and Tebeuv finally began to land their punches and get aggressive. By round three Viveros needed a knockout, and finally seemed to be stepping up. Tebuev matched Viveros’ aggression, and within the final 15 seconds of the round, or as Marshawn called it, “The Desperation hour,” Tebuev found his rhythm, came alive, took a clean body shot, and knocked Viveros down, clean.

Next week: A new virtual world! And a main card that brings back Ilies Mardhi of France, student of The Hurricane himself, Davy Dona,  to fight Luiz Rocha of Brazil (Trained by the same people who helped Certan get the W: The Pitbull Brothers). Sunday at Karate Combat YouTube.