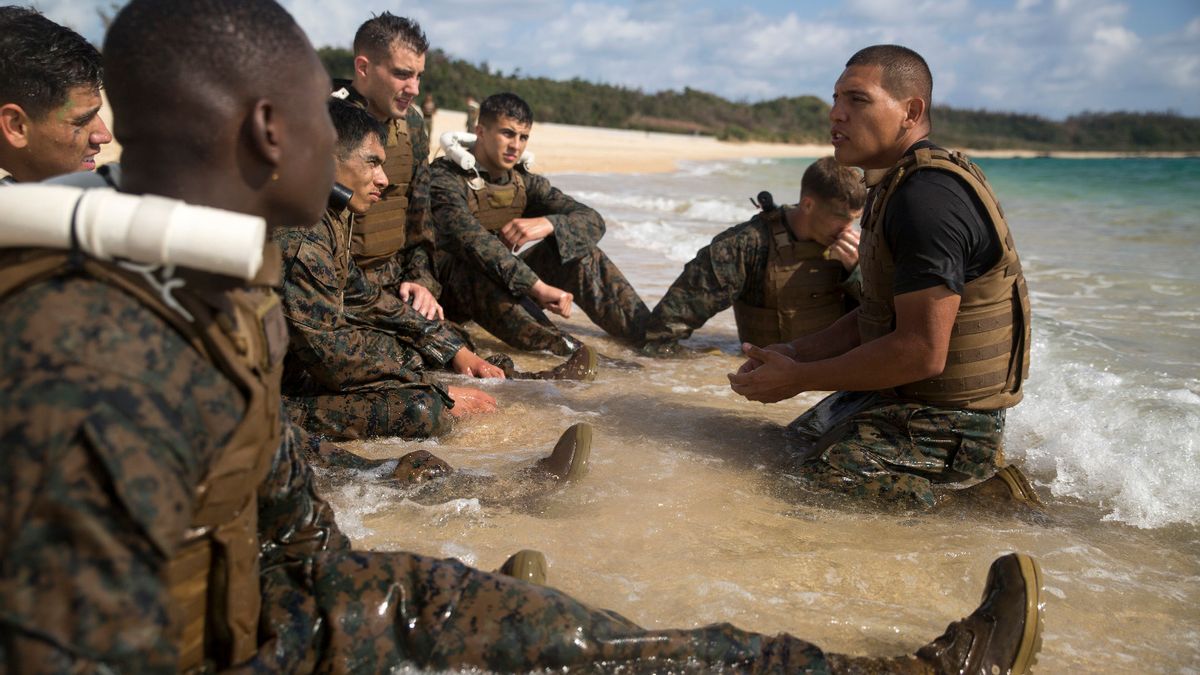 Marines have been learning karate for over 100 years
GeneralKarate

MCMAP: where U.S. Marines put the “martial” in martial arts

If you need proof of the value that martial arts can provide, consider that the U.S. government has funded the Marine Corps Martial Arts Program (MCMAP) since 2002. The purpose of the program is not only to increase combat efficiency but also to develop values like leadership in trainees. These goals are expressed through the MCMAP motto, “One mind, any weapon.” Although MCMAP students study 17 different fight styles that have been combined with Marine Corps philosophies, MCMAP students can ascend through different belt levels and eventually become teachers themselves, if they choose. And just like the many benefits of karate that go beyond combat skills, Marines are instructed in ethics and mental exercises in addition to effective techniques to use when going mano a mano. So it’s just like your local dojo. Well, it might be a little different.

The training regimen of an MCMAP student

Officially established by Marine Corps Order 1500.54A, the MCMAP program trains Marines as well as U.S. Navy personnel that are attached to Marine units. In terms of techniques, the curriculum covers unarmed combat and improvised weapons, as well as rifle and bayonet techniques (yes, bayonets-- more on that later). Those techniques are adapted from 17 different fight styles, from BJJ, krav maga, and Muay Thai to kung fu, Isshin-ryu karate, and taekwondo. In addition to hand-to-hand techniques, strength and endurance are improved through competitive team exercises like calisthenics, log carries, and boxing matches. 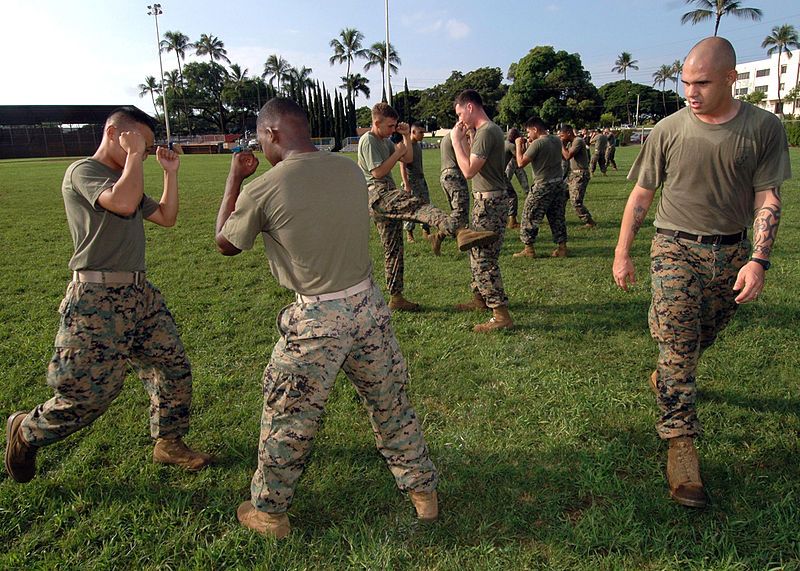 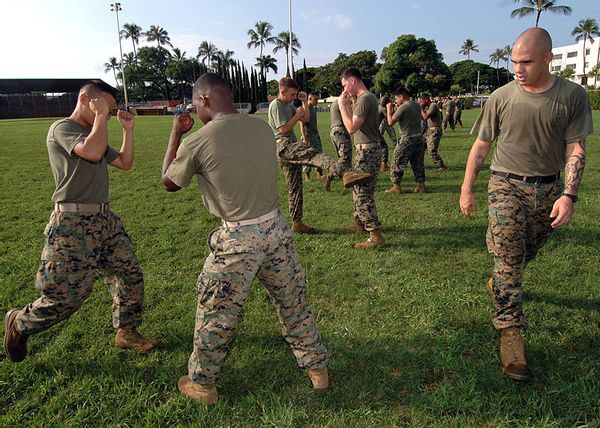 One mind, any weapon: A curriculum for mind, body, and soul

Combat techniques actually only comprise about a third of training in MCMAP. As any Karate Combat fighter can tell you, karate goes far beyond the body. Outside of physical development, students take classes to help train themselves mentally and ethically. Topics include leadership, courage, commitment, and teamwork. Part of the program is also dedicated to Warrior Studies, wherein students learn fundamental combat tactics by examining notable warriors and societies that have been known to produce warriors, from the Apache to the Spartans. Another focus is Combative Behavior, in which Marines study interpersonal violence, Rules of engagement, and responsible use of force.

Raise the belt. Earn your stripes.

There are five belt levels in MCMAP, beginning with an entry-level tan belt that requires 27.5 hours of training time. The next level up is gray (25 additional hours), followed by green (25 hours), brown (33 hours), and black (40 hours). Similarly to karate, the MCMAP black belt has multiple degrees-- six to be precise. Members of infantry are generally required to earn a grey belt at the very least. Marines that want to become instructors themselves can take courses to become a Martial Arts Instructor (MAI), or a more senior Martial Arts Instructors-Trainers (MAIT). MAIs wear one vertical tan stripe on their MCMAP belt, while MAITs wear one vertical red stripe. 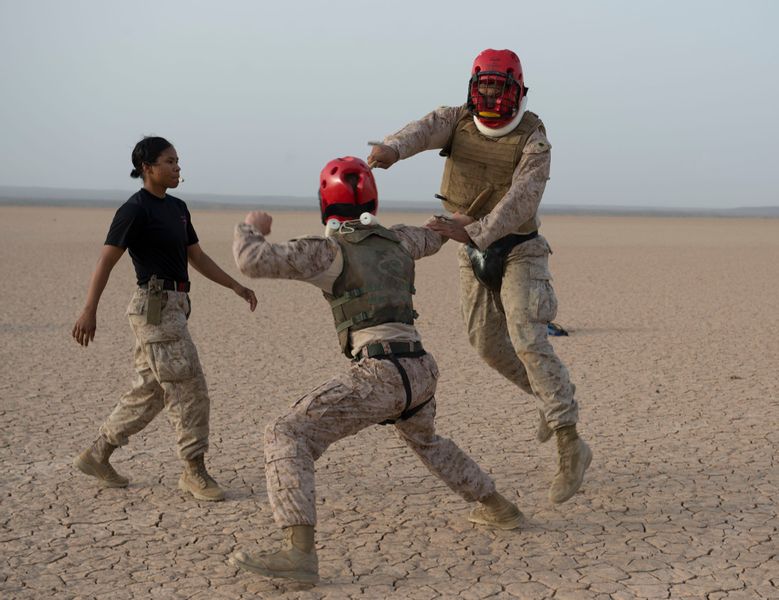 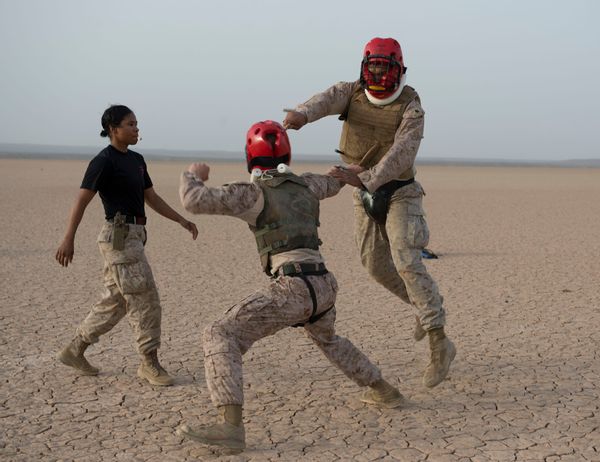 The evolution of MCMAP

Although the program has now been around for almost two decades, the military has actually trained service members in techniques based in various martial arts forms for about 100 years. Before WWI, Marine boarding parties trying to capture enemy ships were armed with bayonets and sabres. However, with the advent of brutal trench warfare, Marines began to use unarmed combat techniques to get the advantage over opponents. After WWI, those techniques were standardized based on boxing, wrestling, savate, and fencing. Officers who had learned Kung Fu techniques from Chinese American Marines spread their knowledge as well. In 1956, Gunnery Sergeant Bill Miller developed “Miller’s Combat Curriculum,” a program based in many martial arts styles, including Okinawan karate. These techniques eventually developed into the LINE System in the early 1980s, which gave way to the Marine Corps Close Combat Training Program in the late 1990s. A few years later, MCMAP was formalized, and the rest, as they say, is history.